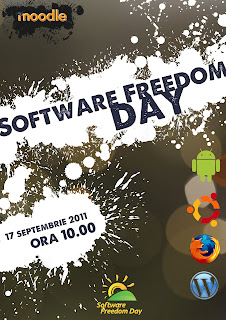 The Software Freedom Day event, organised by Moodle Romania in a few high schools in Arad, Iași and Baia Mare, Romania, was a total success. Pupils participated to GNU/Linux labs, received CDs with distros and OpenDisc (Free Software for Windows), listened to online presentations (via Moodle platform, in a virtual class) and, of course, had fun...  :)

Here are some nice videos - video1, video2 - and a photo gallery from this event.

At the end of August, I was pleased to participate at "Informatica la Castel" ("Informatics at the Castle") Free Software Summer School, 2011 edition.

This annual event - already a tradition among Romanian computer geeks - is kindly hosted by Universitatea de Vest "Vasile Goldiș" ("Vasile Goldiș" West University) and ARLUG, the Arad Linux User Group. It's like a pleasant summer camp, at the 1724 Cernovici Castle (position), in the beautiful landscape of Macea village - about 20 km away from the city of Arad, Romania and near the Hungarian border.

Each year, the event's goals are not only purely tech talks, but also raising awareness of Free Software ("Software Liber") benefits for the large, non-technical Romanian public. We also debated on the practical aspects - including financial implications - of Free Software implementations in Romanian Public administration - a zone where there is still a lot of work to do.

The 2011 edition was also focused on e-learning: the e-learning (free) software Moodle and its practical applications in Romanian-speaking education network. The subject stirred up much interest and participation, not only from Romania (schools, high-schools, universities), but also from Moldavian universities of Chișinău, Bălți and Tiraspol. This year, the summer school enjoyed the direct help and participation of the Moodle Romania team, which has a strong presence in Arad county.

Demonstrating GNU/Linux installation and basic operations to present Microsoft Windows users was another task for the school - each year, Linux installfests are permanent agenda. The organisers seek participation from the largest possible number of wannabe GNU/Linux users and newbies (students, pupils, public clerks, teachers of all grades). Not only a small "computer laboratory" was available (running a wide selection of GNU/Linux distros, such as Fedora, Debian, CentOS, Xubuntu, Trisquel, Ubuntu, and Fedora LXDE), but we have demonstrated the install of GNU/Linux for both desktops and servers (Ubuntu 11.04, CentOS 6.0 and a Moodle server on Ubuntu).

(Due to recent history and political regime, Romania's start in wide use of computer technology is a post-1990 matter. Thus, the Romanian computer market has a few particularities that distinguishes it from the Western countries. For one, the Romanian technological landscape is centered on desktop - large datacenters, together with their Unix-like, '70s cyberculture are virtually absent, even in universities. As a desktop Linux distro, Canonical's Ubuntu Desktop has a clear place here, together with Red Hat's Fedora. Second, the low-to-average IT educated user is deeply entrenched in proprietary programs - that's because a whole generation of IBM-PC users gained their first IT skills in Microsoft software, in a Microsoft-dominated public schools system. Third, the harsh economic conditions still encourage the illegal copying of proprietary computer software, eliminating the "price advantage" of Free Software and discouraging the use of these technically superior solutions.)

Last but not least, the Free Software Summer School brings a lot of fun for participants - some of which are "veterans". It's an invaluable occasion to make friends, share ideas and have long, passionate face-to-face discussions on technical, social and "political" matters. As for relaxation and "peace of mind" after tech talks, this year we had a short trip to Bezdin and Hodoș-Bodrog nearby monasteries - wonderful pieces of Christian faith engraved in stone - some foot walks along Mureș river and, of course, a camp fire, evening dance, fine dishes and local wine.

The Cernovici Castle is not only the center of Macea village, but also a landmark for botanists. Its 0.1 square miles park is a botanical and arboretum scientific garden, well-known over the world. There are more than 3000 species of plants and trees here, some of them rare for the Romanian geographical latitude. At night, this is a park with dark alleys, where scaring ghosts appear frequently - please see some of the following pictures  :-)

There were many presentations available, on various subjects - from the use of Moodle in Romanian and Moldavian universities curricula to computer games and HTML 5 & JavaScript programming. This year, I tried to explain to the Romanian audience the goals of the FreedomBox Project , together with some other considerations on computer security, online privacy and the capital importance of Net Neutrality.

In no particular order, here are some pictures - that worth more than a thousand words (not only mine, but courtesy of Prof. Mihai Jalobeanu, Prof. Pavel Moș, Prof. Daniel Popa, Mr. Liviu Berecz and Mr. Bogdan Lăzărescu).