I've recently paid a visit to the Mud Volcanoes in Buzău County, Romania. These constitues a pretty rare geological phenomenon, maybe unique in this country. But since I've found no online touristic information about them - at least not in English - here's a short presentation and some photos obtained from a local flyer. I've reproduced the text exactly, despite some obvious language mistakes. Text by Mihai Răducă, graphic design and photos by Victor Bortaș.

At 20 km north from the town of Buzău and on the right bank of the Buzău River, the road passing through the mountains towards Brașov stops for a moment in Berca village. In the area between this village and Băceni village (in the north of Berca), one can ﬁnd small villages and hamlets scattered on the barren hills of a bleak, desolate landscape, which cannot remind us in any way of the former deciduous forests covering the slopes.

Life was never easy in this region, where, when drought, the salty, brackish waters bend and go into the depths of the earth and when torrential rains fall, the deforested slopes slide down. That is why the locals have learnt to do all kinds of activities: agriculture, grazing and fruit and wine growing.

The resources of the subsoil - ballast, clay and sand – have been exploited intensely since old times, still another one is the real treasure, hidden inside the heart of the earth for millions of years! Oil and gases emerge from the deposits - buried down low, along the Sub-Carpathians, from the Jiului Valley to the Slănicului and Buzăului Valleys.

A kind of moonscape, bare and empty, greets the traveler who crosses the Buzău River and goes up the gravel road, which bends to the north, to Policiori… At 12 km far from Berca, after a few minutes of walking through the hayﬁelds, one can see some strange shapes, looking like as if they were from another world...the Mud Volcanoes. The name comes from their conical shape and from the material they are made of.

The gases, coming out from the inside of the lazy-boiling mud of the craters which have been built up around their emission points, make some strange noises, some grave, stiﬂed “snaps” and that is why the natives call the Mud Volcanoes also “pâcle” or “ﬁerbători”.

So, the plateau at the foot of the Dragon Hill was named by the locals “Pâclele Mari”. It is a lifeless landscape with lots of craters, small or big, some of them over 3 m high and from which “mud rivers” overﬂow intermittently. The same desolate landscape one can ﬁnd at “Pâclele Mici”, the second plateau near Scorțoasa, just taking the same gravel road towards north, another farther away from Berca. These hallucinating-shaped structures have sprung up from the mud and have been brought up to the surface by natural gases, along the deep faults, which cut transversally one of the most impressive oil and gas ﬁelds in the area, the anticline Sătuc – Berca - Arbănași - Niculești. From the stirring of the mud formed where the phreatic waters meet the clayey rocks deep down the earth and the strange bubbling of the oil-smelling gas bubbles, new shapes come to life, every time more hallucinating than the ones before. Nature experiments under our own eyes in this unique place in Romania, the limit between reality and non-reality losing its consistency to disappearance.  "

Here's how such a volcano looks from a close perspective (photo taken by me): 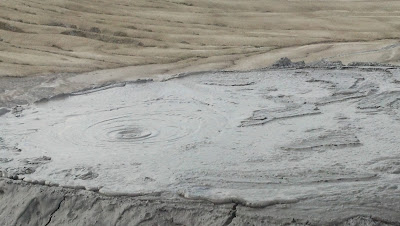 Totally unrelated with the volcanoes themselves, that day I had the chance to witness (from far distance) a photo session for some glossy magazine. Apparently, the two girls and their photographer used the moon-like landscape to shot some exotic pICTURES (including some topless). Of course, I couldn't resist to play the paparazzi role :) 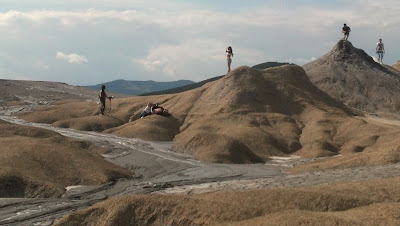 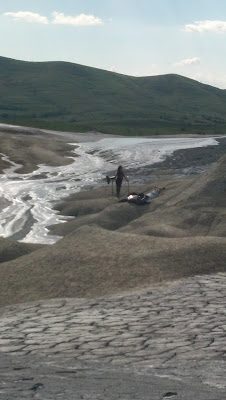 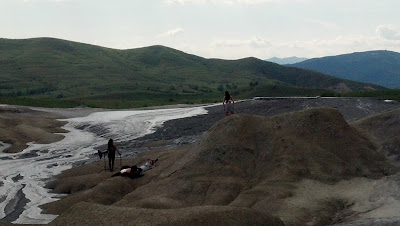 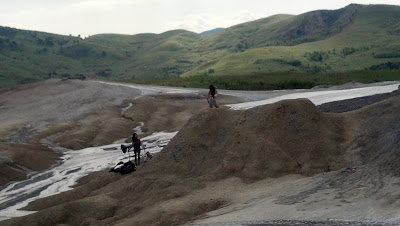 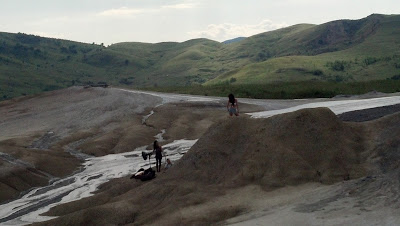 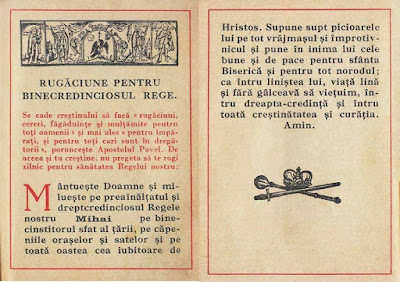